Headers are an integral part of football. Safety concerns have changed the rules among minors in many countries, including the United States. 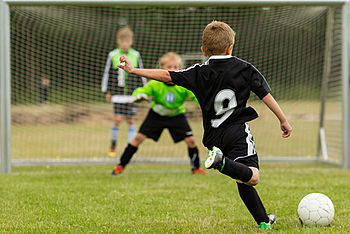 A study published in the journal “JAMA Ophthalmology” provides evidence that headballs can cause brain trauma, even in older players, which are more subtle and can go unnoticed, but which can nevertheless impair mental performance and eye function, the American researchers report in the publication. "Heading soccer balls multiple times in a short period of time can interfere with the connection between eyes and brain," the study co-author Keisuke Kawata, assistant professor of kinesiology at Indiana University, told UPI.

In 2017, the U.S. Football Association prohibited or restricted the kicking of soccer balls for players up to the age of 11 for security reasons. According to the DFB , the header does not yet play such a big role for the younger age groups, later "dosed" training should take place.

Many studies on the subject of "headballs" in recent years

Soccer headers have attracted considerable attention in recent years, largely due to recent research that highlighted the risk of injury. The long-term effects of concussions on athletes in various sports - including ice hockey and American football - have been extensively studied in both the media and the medical community.

The results of Kawata and colleagues follow a groundbreaking study published last year in the New England Journal of Medicine that documented the brain health of Scottish footballers who suffered repeated concussions. In addition, a study published in January in JAMA has linked memory deterioration to repeated headballs while playing football.

For their study, Indiana University researchers compared the cognitive effects of headballs in 40 adults with those of 38 controls who only kicked the ball. A JUGS soccer machine was used to "pass" the ball to participants from a distance of approximately 12 meters (40 feet) at a speed of approximately 40 kilometers (25 miles) per hour. The participants in each group beheaded or kicked the ball ten times.

The authors recorded the head acceleration - as a measure of the load on the head - of the participants in each group and found that the head acceleration among the "headers" was almost ten times higher than that of the kickers. All participants underwent the King Devick test immediately after the balls were hit or kicked, two hours later and 24 hours later. This test can detect disorders of eye movement, attention and speech. It can also be helpful in detecting concussion.

"This study closes an important knowledge gap regarding the acute impact of football's head," added Kawata. "I think there is enough evidence that even light headballs, if done repeatedly, can increase the risk of brain disorders in the long term."