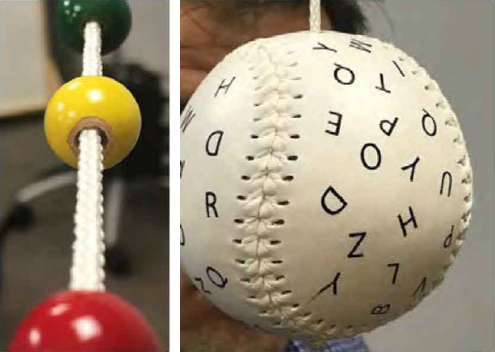 The number of diagnosed concussions in the United States is growing each year, with some conservative estimates of sports-related mild traumatic brain injury (mTBI) approaching 4 million annually.1 The public's general awareness of concussions is also on the rise.

And that awareness is sparking some anxiety, said Rod Foroozan, MD, at Baylor College of Medicine in Houston. "We're seeing an increasing number of concerned patients blaming a multitude of symptoms on a concussion when, in fact, they're not at all due to a true brain injury."

Still more questions than answers. But despite this growing recognition of the sequelae of concussions and the latest developments in the field of traumatic brain injury, clinicians are often left with more questions than answers, said Dr. Foroozan. "Much of what we know about mTBI is more anecdotal than clinical. To provide the best care for patients suffering from a possible concussion, we need to start moving away from the subjective assessment of symptoms like headache or blurry vision and develop more objective testing."

King-Devick. Over the past few years, one sideline protocol-the King-Devick (KD) test-has achieved a measure of acceptance. This test, which has potentially concussed athletes read numbers in quick succession (a method called rapid automatized naming), provides an objective measurement of the time needed to read numbers on a set of three cards. (The traditional test uses laminated cards, but a smartphone- or iPad-based version is also available.)

The success of the KD test lies in its ability to assess variance in saccades and other eye movements without the need for any specialized equipment. And the published data supports its use: A recent meta-analysis of 15 studies assessed the ability of the test to identify concussed athletes and concluded that rapid automatized naming is a critical dimension of mTBI testing.2

Pros and cons. "These types of rapid automatized naming tests-the KD version, especially-are becoming the sideline standard because they are easy to manage, fairly objective, and supported by good research and evidence;' said Prem S. Subramanian, MD, PhD, at the University of Colorado in Aurora. "But they also come with two inherent limitations: The tests require a good baseline, and they can be faked."

Need for baseline assessments. "Without a baseline assessment, the results of these tests following injury are of course meaningless because you have nothing to compare them to," said Dr. Foroozan, who also serves as the primary eye care provider for Houston's professional basketball and soccer teams. "So in the NBA, for example, you're seeing more and more teams have players take a KD test during the preseason-just like they would a baseline echocardiogram in case of a possible cardiac event during the regular season."

Potential for fakery. However, baseline testing brings its own set of problems. "The innate problem with capturing a baseline is that an athlete can purposefully throw the test," said Dr. Subramanian. "Based on my experience with the National Collegiate Athletic Association, athletes realize there is a positive value in doing poorly on a preseason concussion assessment." That is, he explained, "If your baseline KD results are already near concussion level, you're less likely to be removed from a game later on after receiving a head injury."

Dr. Subramanian added, "We really need a sideline screener that is completely independent of subjectivity and athletes' intentions-something that can't be cracked:' 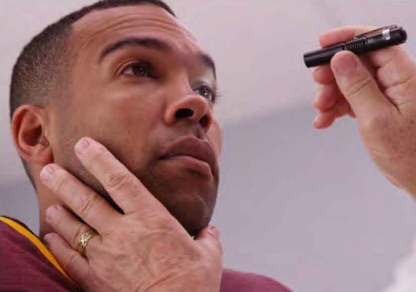 PUPILLARY EXAM. Thanks to the search for objective biomarkers, quantitative pupillometry may replace the classic penlight exam.

What about concussion testing outside of sports, where there is no baseline for comparison? "In the clinic, many ophthalmologists will see first-time patients with blunt trauma resulting from workplace or motor vehicle accidents, and this is where assessment becomes difficult;' said Dr. Foroozan.

Without an assessment that is weighted to objective criteria, clinicians are stumbling a bit in the dark, agreed Jeffrey R. Hebert, PhD, PT, at the University of Colorado in Aurora. "Subjectivity works both ways when we're trying to evaluate a patient's health." As he pointed out, some patients might overemphasize symptoms that they believe are related to an mTBI. In contrast, others might downplay their symptoms, risking their health to get back to work or resume other normal daily activities. "That's why we need an evaluation that is more quantifiable."

Are there any measurable structural changes to the eye that present following a traumatic brain injury? Although some studies have suggested changes in retinal thickness based on concussion history, nothing to date has clearly shown any structural ophthalmic biomarkers following an mTBI.5 For example, a recent report comparing concussed patients and healthy controls found no significant difference between the two groups in full retinal thickness and only marginally significant reductions in the peripapillary retinal nerve fiber layer following injury.6

However, recent developments in eye tracking and pupillary reflex are demonstrating promise in this search for quantifiable concussion clues.

Eye tracking. "Our best diagnostic method for assessing mTBis likely involves the automated measurement of eye movement abnormalities and saccadic velocity;' said Dr. Subramanian. One research team recently evaluated an eye-tracking algorithm as a biomarker for concussion in children. They found that the velocity and conjugacy of eye movements correlated well with symptoms of mTBI and the resulting convergence and accommodative abnormalities.7,8

And industry is taking notice. For instance, Oculogica has used the research in this area to develop EyeBOX, a tabletop device that sends a small video around the perimeter of a rectangular screen and tracks each eye to gather 100,000 data points. The data are then fed into an algorithm to calculate a range of metrics quantifying speed, coordination, and range of motion. The result is a noninvasive aid for scoring the severity of a brain injury-and because the technology uses machine learning for statistical analysis, it doesn't require any baseline testing. (The EyeBOX received FDA DeNovo approval on Dec. 28, 2018.)

The introduction of such technology "is proof that we can better quantify the functional capacity of ocular motor functions (for example, pursuit eye movements) following a possible mTBI;' said Dr. Hebert. "And with it, we're getting closer to the type of objective assessment that can't be influenced at all by patients' self-reporting."

Pupillary reflex. Another possible biomarker involves quantitative pupillometry. "We're seeing more interest in the quantification of pupillary response and velocity not only when the eye is exposed to varying degrees of light but also in response to ocular motor functions such as convergence and divergence," said Dr. Hebert.

The search for better science is also key to better rehabilitation following a positive diagnosis.

Over the past decade, a number of concussion rehabilitation centers have popped up across the country, driven in part by public anxiety over the dangers of mTBis. The worst of these clinics provide services that have no scientific merit in an effort to capitalize on a new market, said Dr. Foroozan. The best, however, are utilizing the latest techniques in vision therapy and vestibular rehabilitation.

Yet as Dr. Hebert pointed out, too many clinicians continue to treat the visual and the vestibular as if they are mutually exclusive. ''Academically and scientifically, we really haven't moved forward enough in terms of researching and quantifying the interplay between the visual symptoms that patients experience after mTBI and their accompanied vestibular and balance problems."

That's an important issue, Dr. Subramanian agreed. "One of the most overlooked aspects of vision is how we adjust the orientation of our body in space and maintain limb coordination." But that's not always front of mind for many clinicians who treat visual dysfunction following blunt injury trauma, he said. He added, "Many concussion symptoms are vague and challenging for clinicians to assess-dizziness, 'feeling off,' blurred vision. That's why we need more research into objectively measuring how a disturbance in balance and equilibrium can result in ocular motor abnormalities."

Integrated approach. Dr. Hebert has already seen the benefits of bringing the visual and the vestibular together in the rehabilitation of injured veterans. "Too often, a patient sees a vision therapist for one session and then a physical therapist for a separate session-the two are held in isolation;' he said. "But in my experience, this isn't nearly as effective as a multifaceted approach."

In his clinic, he explained, "We'll use a Brock string for convergence insufficiencies and Marsden balls for smooth pursuit. But we also throw posture control into the mix."With this combination, "we're having patients work through their vision rehab at the same time that they work on their balance using head tips and roll maneuvers in standing. We're stimulating the vestibular system while seeing improvements with ocular motor challenges and resultant optic performance enhancement."

Looking ahead. It's this type of experimentation that will continue to push advances in postconcussion care, Dr. Subramanian said. "We're seeing a lot of debate as to the best methods of diagnosis and treatment. And the controversy arises because we simply don't have great standardized measures for many of the murky elements underlying the dysfunction that patients are reporting." He concluded, "If we as clinicians really want to advance our understanding of mTBI, we have to look at the matter objectively; ask ourselves what makes sense, what doesn't, and what we haven't tried before; and design good clinical trials to establish the quantitative evidence that we are too often lacking."

Dr. Foroozan is associate professor of neuro-ophthalmology at the Baylor College of Medicine in Houston. Relevant financial disclosures: None.

Dr. Hebert is associate professor of physical medicine and rehabilitation at the Marcus Institute for Brain Health and director of the Physical Performance Laboratory at the University of Colorado Anschutz Medical Campus in Aurora. Relevant financial disclosures: None.

Dr. Subramanian is professor of ophthalmology, neurology, and neurosurgery; chief of neuroophthalmology; and vice chair for academic affairs for the department of ophthalmology at the University of Colorado Anschutz Medical Campus in Aurora. Relevant financial disclosures: None.

see this article at aao.org/eyenet.