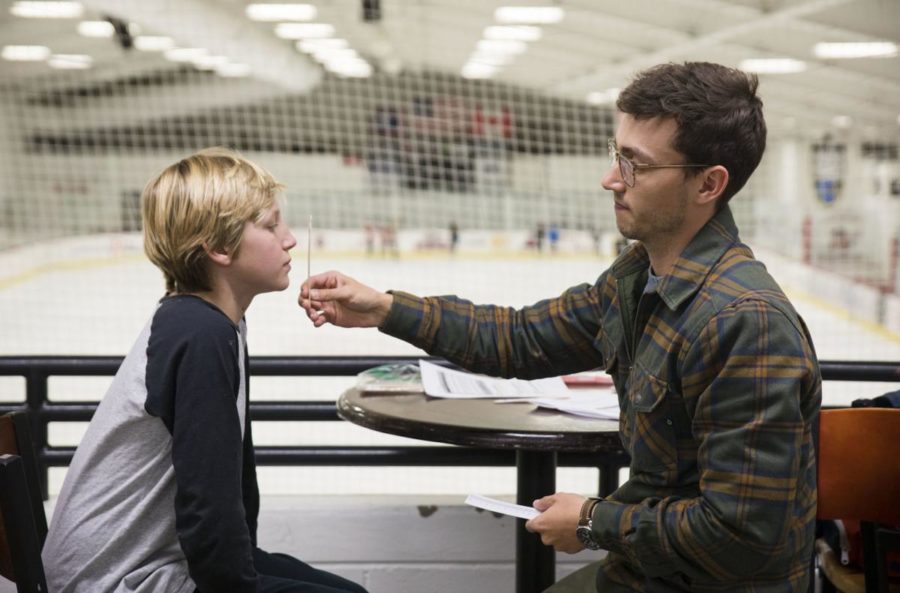 Jack Conroy, 12, performs the Vestibular Ocular Motor Screen (VOMS) test administered by Jacob Munger, physical therapy student at Four Pines in Alpine, during the concussion testing Nov. 20 at Snow King Sports and Events Center. Conroy said he has been playing hockey since he was 2 years old.

The scene in late November wasn’t a sporting event. It was a concussion baseline screening night, a new endeavor of a group of medical providers. Physical therapists, speech language pathologists and St. John’s Health, which all compete for business, have teamed up to start a movement meant to make athletes safer.

“We don’t need to be in competition when we’re talking about community health,” physical therapist Hayden Hilke said.

Jackson Youth Hockey athletes were in attendance that particular night in November, but the voluntary program has also tested kids in the Jackson Hole Ski and Snowboard Club. The goal is to obtain baseline scores on a series of physical and cognitive exams that allow providers, coaches and parents to understand when athletes sustain a head injury and how to direct treatment.

Concussions have been a focus of coaches and medical providers across the country, as the effects of traumatic brain injuries become more apparent. With more understanding of the long-term effects of head injuries, like the chronic traumatic encephalopathy that has affected many former football players, comes the awareness that head injuries sustained early in life may cause lifelong problems.

The fact that many mild head injuries are not detected raises a need for better testing procedures. Though the problem is not endemic to Jackson, Hilke said, the community has historically not strategically identified and treated concussions.

“There wasn’t really a specific plan in place,” she said. “I took it upon myself, because I felt I needed to really understand what we were doing.

“It was very antiquated.”

If you had no knowledge of concussion screening before walking into the Snow King arena in late November, you would have been mightily confused. Providers simultaneously administered all four parts of the baseline test: Kids had iPhones strapped to their chests while they balanced with their eyes closed. Others attempted to watch a Popsicle stick as long as possible, and some yelled out unrelated strings of numbers.

Speech language pathologist Chris Smithwick chose the tests that comprise the baseline screening. They provide physical and cognitive information that helps identify concussive symptoms that are not immediately noticeable.

“What we wanted to do is make it efficient and cost effective, for one,” he said, ”and have them fit into a 15-minute time frame.”

Two of the tests measure physical characteristics and require varying degrees of technology. The first is a vestibular ocular motor screening in which patients follow a Popsicle stick with their eyes through a series of movements.

Head injuries can cause eyes to have trouble working in tandem, so the screening can detect physiological symptoms that aren’t apparent. Physical therapist Margaret Blair, part of the team that developed the baseline testing program, said the screening measures gaze stabilization and eye convergence, which describes how well a person’s eyes work together as an object is brought closer to the face.

The next exam, the King-Devick balance test, also tests unseen symptoms, though slightly differently. Young hockey players lined up for the balance test, in which an iPhone is worn in a chest harness. The tester asked kids to stand with their feet side by side and close their eyes for about 20 seconds.

Then the kids followed that by standing with their eyes closed and their feet lined up toe to heel, first with the right foot in front, then the left. The smartphone detects how much the body sways while working to maintain the position.

“As soon as someone is injured and you retest them,” Smithwick said, “there’s a line that will show on a graph how far out of that out of baseline they are.”

The other pair of tests captures cognitive abilities. One borrows from the Woodcock-Johnson tests, a standard set of exams with a bevy of applications, from concussion testing to identifying kids for special education.

In one part, kids listen to testers say a set of numbers, then repeat the numbers back in reverse order. For instance, the tester would say, “One, five, seven, two,” and the kid would say back, “Two, seven, five, one.” They start with two integers and work their way up until they cannot accurately repeat back the numbers, or until the test maxes out at eight digits.

In the second part, kids read through a letter-pattern-matching test. They look at a series of single letters or groups of letters and have to pick out the two in a line that match. When they are finished, their time is recorded, and slower times upon retesting can indicate concussive symptoms.

Each of the first three tests gives important baseline data, but the fourth has one unique characteristic. The King-Devick test, administered on a smartphone or tablet, is a sideline screening that any trained person, not just medical professionals, can give.

“The K-D test can be feasibly administered by laypersons as an effective objective ringside concussion detection tool,” says a 2014 study in The Journal of Sports Medicine and Physical Fitness.

In the King-Devick test, an athlete reads a series of numbers randomly spaced on lines. They read left to right across the page, and because the numbers are not spaced evenly, their eyes must track together to find the numbers. They go through three pages of numbers, and their time is recorded.

Just like the letter-pattern-matching screening, a slower time on retest can indicate a concussion. Though the King-Devick test is not the only part of identifying a concussion, it is an important step to identifying and removing players who might have sustained a head injury.

“The K-D test is a single sideline tool and cannot substitute for the clinical judgment of the evaluator,” the 2014 study says, “but may provide supportive evidence of a concussive event.”

Cayden Walles, who was at the Snow King baseline testing night, knows the difficulty of just wanting to get back out and play following a head injury. The Jackson Youth Hockey player fell on the ice in practice last season and hit the back of his head.

Even though he was wearing a helmet, Cayden sustained a bad concussion. He missed the rest of the season and was unable to go to school for weeks.

“I thought it was pretty terrible because you miss out on all your sports,” Cayden said, “and I had to sit in dark rooms listening to audiobooks.”

Like most well-rounded kids, Cayden does a variety of activities, from skiing and hockey to reading and robotics. Head injuries, however, make any activity difficult, so Cayden found himself struggling for months to concentrate, no matter what he tried to do.

His dad, Brooke Walles, and his doctors kept him from all physical activity for weeks, until his dad relented on skiing well into the recovery period. Cayden said he doesn’t have any ill effects from the concussion, which might in part be attributed to his extended period of rest.

“Players who sustained one concussion in a season,” says a 2000 study in The American Journal of Sports Medicine, “were three times more likely to sustain a second concussion in the same season compared with uninjured players.”

Cayden’s situation was one of the more obvious ones. His headaches, dizziness and other symptoms were apparent, but many head injuries go undetected, leaving athletes at a heightened risk for a more serious concussion.

According to the American College of Sports Medicine, nearly 85% of sports-related concussions go undetected. Having coaches equipped to administer the King-Devick test on the sidelines could help keep kids off the field after a mild brain injury, reducing their risk of a more catastrophic one.

With that in mind, Hilke said, the providers behind the program would like to see it expand, though they said it should remain voluntary.

“Several years ago they used to do a community physical, so whatever athletes wanted to do a physical could do it there,” she said.

“We would like to run it in that kind of format, potentially through the school system, but we haven’t talked with them yet.”

Hilke said the baseline testing should be done once a year, especially because children’s brains develop so quickly, particularly between the ages of 8 and 12. Creating a physical program would be more streamlined than testing kids in each sport piecemeal.

But the physical therapists involved, as well as St. John’s Health administrators who have helped in kickstarting the program, say the current system is a great start and light years better than how concussion treatment used to be in Jackson.

“The biggest thing for me is the open line of communication has been wonderful,” Hilke said. “It has been great to work alongside them, and this has truly been an experience that has brought health care providers together in an organized and effective manner.”